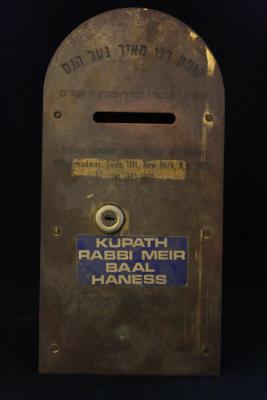 caption:
This Tzedakah Box hung in Kneseth Israel Synagogue to raise funds for scholars in Israel.

Kupat Rabbi Meir Baal HaNes Kollel Polin was introduced by Rabbi Abraham Kalisker, leader of the Hasidim in Tiberias. He secured the assistance of Rabbi Mordecai of Nieschiz, who issued a proclamation, dated "22 Adar I., 5556 [1796]," and addressed to all Jews of Poland, imploring every male and female, adult and minor, whether living in cities or villages, to subscribe a fixed sum every week for the support of their countrymen who had settled in the Holy Land. The amount was to be paid quarterly, in addition to special donations at weddings, circumcisions, and other religious rejoicings. This proclamation was approved by other rabbis in Poland, and the result was a substantial increase in the halukkah.

With great insight, they realized that the fledgling settlements in the Holy Land would need the material support of European Jewry in order to survive. This fund would be the channel by which they could provide assistance to their struggling brothers and sisters in Eretz Yisroel.