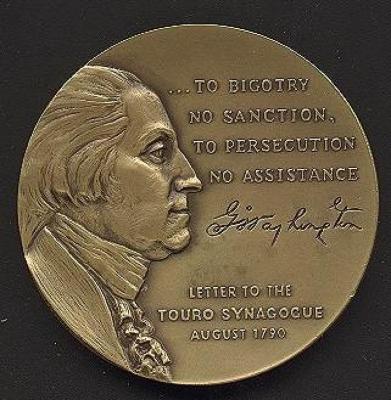 caption:
Profile of George Washington with text "To Bigotry No Sanction, To Persecution No Assistance".

Description
This medal was issued as part of the B'Nai B'rith American Freedom Series.  500 copies of this medal were issued

In the summer of 1790, George Washington visited the little seafaring town of Newport, Rhode Island, in the part of the country colonized by the great champion of liberty, Roger Williams. The people of Newport had felt the harshness of the war, and they had argued long and hard about the new Constitution of the United States. But when General George Washington came to the town, they turned out to greet him. Moses Seixas, Sexton of the Hebrew Congregation of Newport, a friend of Washington's sent him a warm letter of welcome. George Washington's reply to the letter, addressed to the Hebrew Congregation of Newport, is one of the nation's most cherished documents. It is an eloquent expression of American Freedom and religious harmony.