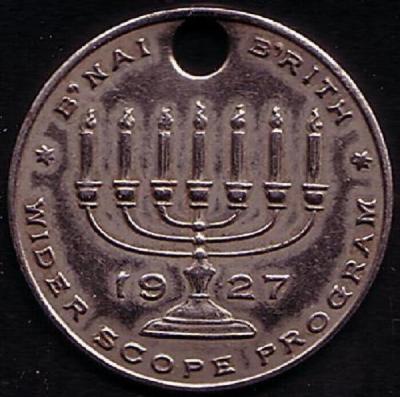 caption:
The front / obverse: "B'nai B'rith" on top and "Wider Scope Program" on bottom.  A seven branch Menorah in the center and dated 1927.

Description
A similar type of medal was issued for one time contributors with the word "contributor" at the back instead of "subscriber" (naturally, in much larger quantity).

This medal was given to contributor who made regular-fixed donation (Subscriber) to the Wide Scope Program (Much like direct debit today). The number of subscriber was punched at the back. With hole at the top for suspension, as made.

B'nai B'rith Wider Scope Program The B'nai B'rith Wider Scope Program was a fundraising program decided by B'nai B'rith on 1925 (And was conducted in 1927) in order to collect large sums of money to support four Jewish organizations. One of them, for instance, was the "Palestine House Building Fund", organization that provided loans to Jews immigrated to Palestine (Mainly Zionist settlers) under very favorable conditions and by that provided help in the development of the Yishuv.