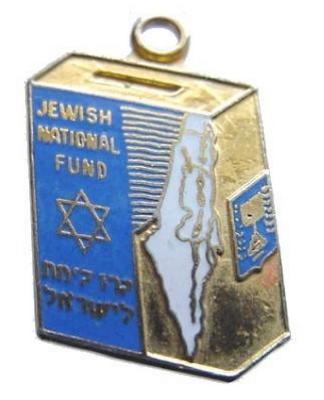 caption:
This pendant was designed by the Jewish National Fund to commemorate Blue Box.
This "new" version became KKL-JNF's official Blue Box after three decades of varied and various forms. White, blue on gold color background, it showed a map of Erez Israel with the lands that had been redeemed. A gold Star of David and the words, 'Keren Kayemeth LeIsrael', in Hebrew and English completed the picture. The menorah (the Israeli state emblem) on the side box.