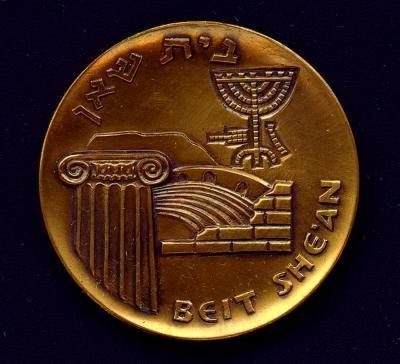 caption:
A composition of the main historical features of Beit She’an, as the visitor sees them today: the Tel, the Roman theatre, the synagogue mosaic, a Doric column.  The name of the city, “Beit She’an” in Hebrew above and in English, below.


Beit She’an, one of the oldest cities in the world, is mentioned quite often in the Bible.  The Philistines displayed there the body of King Saul who had fallen upon his sword to avoid capture. (Samuel I 31:10).  The city was subsequently recaptured by David.

Beit She’an, in the Hellenistic period, was one of the most important and most flourishing cities of the “Legue of Ten Cities”.  In 100 BCE the city was conquered by Yahana Hyrcons, the Hasmonean.  In the days of the Second Commonwealth and during the Mishnaic and Talmudic period, the city was settled by Jews.  The Arabs conquered Beit She’an in 636 CE and destroyed it.  Today Beit She’an is primarily an agricultural community.