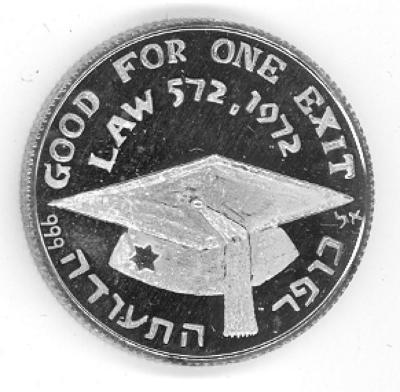 Description
This medal was designed by Avraham Lerner and was issued in Sterling Silver.

The following is the full text of Law 572 adopted by the Presidium of the Supreme Soviet and by the Council of Ministers on Aug. 3, 1972 and put into effect on Aug. 14:
“Law 572. Citizens of the USSR leaving for permanent residence abroad in other than Socialist countries are under obligation to compensate the State for their education received from institutions of higher learning, for graduate work, medical internship, graduate military studies and for receiving the respective academic degrees. Signed Podgorny, (President of the Supreme Soviet) and Georgavze, (Secretary).”