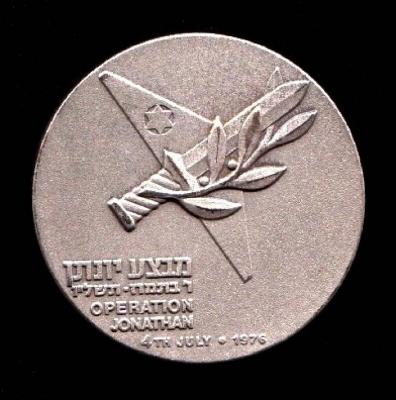 caption:
The IDF emblem with the olive branch entwined around the silhouette of an airforce plane.  A legend” “Operation Jonathan 6 Tamuz 5736” in Hebrew.  The English translation bearing the date “4th July, 1976”

Description
On June 27, 1978, terrorists took over an “Air France” plane, flying the Tel-Aviv to Paris route, and forced the pilot to land the plane at an old hanger in Entebbe, Uganda.  There the plane was met by Ugandan soldiers, as well as terrorists of “The Front for the Liberation of Palestine”, armed to the teeth and carrying quantities of explosives.

The 246 passengers were locked into a dusty building.  The terrorists demanded that 53 terrorists, tried and sentenced, should be delivered to them in exchange for the imprisoned passengers.  They set a deadline at the end of which the hostages were to pay with their lives, if their demands were not met.

The Government of Israel resolved not to succumb to terror, but to liberate the hostages by a daring military operation.  On 3rd July, after all diplomatic efforts failed, and the deadline of the ultimatum was near, a task force departed by plane the flight lasting several hours, to a destination 4,000 kms away from Israel.

In a lightning strike, the terrorists were killed amid a hail of fire exchanged with the Ugandan forces and the hostages were whisked away to the waiting Israeli planes.  In the exchange of fire, Colonel Jonathan Natanyahu, commander of the task force, was wounded and died.  The Entebbe rescue operation was later named after him – “The Jonathan Operation”.