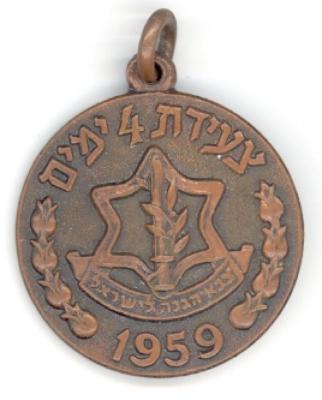 Description
This medal was issued to participants in the 1959 160 kilometer four-day march to Jerusalem medal.  Starting in 1955 the Israel Defense Forces organized the "four day marches" similar to those in Nijmegen, Netherlands. From 1957 onwards the goal of the last day of the march was to reach Jerusalem.  Since 1974 the final day of the march is a one day walk around Jerusalem and called the "Jerusalem march".   The medals were issued with a blue-white ribbon. They were never officially recognized military medals nor to be worn on the uniform.