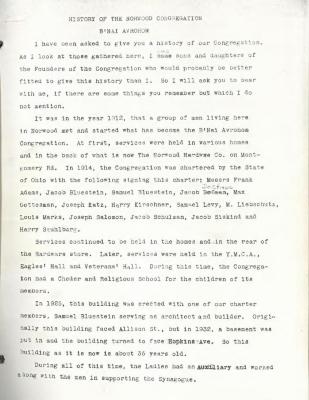 HISTORY OF THE NORWOOD CONGREGATION SINAI AVROHOM I have been asked to give you a history of our Congregation.
As I look at those gathered here, I ssee sons and daughters of the Founders of the Congregation who would probably be better fitted to give this history than I. So I will ask you to bear with me, if there are some things you remember but which I do not mention. It was in the year 1912, that a group of men living here in Norwood met and started what has become the B'Nai Avrohom Congregation. At first, services were held in various homes and in the back of what is now The Norwood Hardware Co. on Montgomery Rd. In 1914, the Congregation was chartered by the State of Ohio with the following signing this charter: Messrs Frank Adams, Jacob Bluestein, Samuel Bluestein, Jacob Dorfman, Max Gottesman, Joseph Katz, Harry Kirschner, Samuel Levy, M. Liebschutz, Louis Marks, Joseph Salomon, Jacob Schulman, Jacob Siskind and Harry Stuhlbarg.
Services continued to be held in the homes and in the rear of the Hardware store. Later, services were held in the Y.M.C.A., Eagles' Hall and Veterans' Hall. Daring this time, the Congregation had a Cheder and Religious School for the children of its members. In 1925, this building was erected with one of our charter members, Samuel Bluestein serving as architect and builder. Origi-nally this building faced Allison St., but in 1932, a basement was put in and the building turned to face Hopkins Ave. So this building as it is now is about 35 years old. During all of this time, the Ladies had an auxiliary and worked along with the men in supporting the Synagogue.