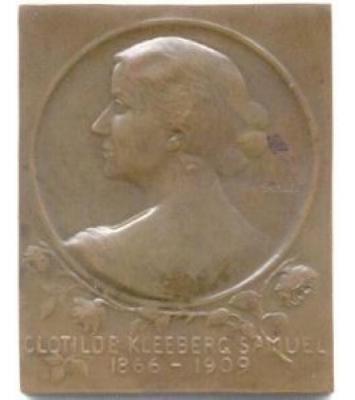 caption:
She is shown in a medallic portrait, in profile, head and shoulders, facing to the left.  Below the medallion a rose and her name and dates, CLOTILDE KLEEBERG-SAMUEL

Description
This plaque was sculpted by her Belgian medalist husband Charles Samuel (b. 1862).

This is an Art Nouveau Memorial Plaque of the famous Jewish Pianist Clotilde Kleeberg-Samuel.  Clothilde Kleeberg was born in Paris and studied at the Conservatoire, where she was something of a prodigy, winning the highest honours and a medal at the tender age of eleven.  Her first (highly acclaimed) European tour was in 1881, and Germany in 1887. It is reported that and she first appeared in London in 1883, however The Times newspaper, January 9th  1871 advertises that “MLLE. CLOTILDE KLEEBERG had the honour to announce that she will be giving two PIANFORTE RECITALS at Princes-hall, on Saturday afternoon, at 3 o'clock. Doors open at 2:30”.  She would have not yet been six years old.  Her husband, Charles Samuel, was a respected medallist, who exhibited in New York during his lifetime and examples of whose work can be found in the British Museum and other major collections

For an example of this medal, see the following link:
https://www.rijksmuseum.nl/en/collection/BK-2004-5