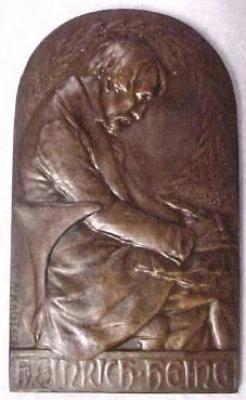 caption:
Shows the suffering poet seated in a chair.  Over him is bent a branch of bay.  To the right of him are his dates 1797-1856, with a star before the birth date and a cross before the death date.  Behind the poet is the signature of the medallist.  Beneath the figure is a plaque with his name Heinrich Heine, beautifully rendered in art nouveau style letters.

Description
H. Kautsch’s plaquette of Heinrich Heine (1797-1856) is a sick, tormented man, sitting in a beautifully carved chair in a crumpled coat.  He is bent over his crushed papers, that he can no longer regard, his hands folded over his knees holding a quill pen.  In 1848, Heine, self-exiled from Germany and living in Paris, was struck down with a series of medical disorders that rendered him an invalid for the remainder of his life.  He was paralyzed and his body was wracked with cramps.  His vision was affected to the point where he was nearly blind.  Heine would never leave his sickroom until his death.  He described his chamber, in a famous phrase, as his “mattress crypt.”  This is how he described himself at this period.  “All I am now is a poor Jew sick unto death, an emaciated image of wretchedness, an unhappy man.”

But Heine, overcoming tremendous difficulties, continued to write.  Indeed, out of his suffering Heine found new inspiration and strength for his creativity.  The inscription on the reverse of this plaquette reads in English translation, “From my great pain I make small songs.”  H. Kautsch, an Austrian medallist, produced his design for the Vienna mint.  It is struck in bronze and measures 45 millimeters by 75 millimeters and is tablet shaped.

The artist, Heinrich Kautsch (born in Prague/ Czechnia in 1859) was the son of a Goldsmith and first studied at the Goldsmith School in Prague. He went on to study at the Industrial Arts School in Vienna where he was pupil to Schwarz and Koenig. He visited the art centers of Italy France and Germany, in 1882 he was selected for the position of professor at the School of Decorative Arts in Prague. In 1889 he settled in Paris where he worked for the rest of his life. In 1897 he received an honorable mention, at the Exposition Universelle 1900 he was awarded a silver medal. He received gold medals at the Universale Expositions in St. Louis in 1904 and Liege in 1905
According to Baxter, "Kautsch's medals reveal an imaginative decorative sensibility, shaped by contact with the Austrian art nouveau movement, known as the Vienna Secession. In works such as his medals of the German Poet Heinrich Heine and the Munich painter Franz von Lenbach, Kautsch revitalizes the French allegorical idiom through his expressive modeling and use of artistic lettering in the Vienna Secession style. "