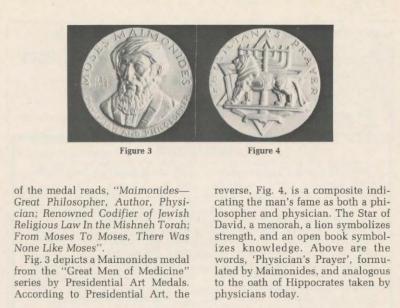 … of the medal reads, “Maimonides – Great Philosopher, Author, Physician; Renowned Codifier of Jewish Religious Law In the Mishneh Torah; From Moses To Moses, There Was None Like Moses”.

Fig. 3 depicts a Maimonides medal from the “Great Men of Medicine” series by Presidential Art Medals. According to Presidential Art, the reverse, Fig. 4, is a composite indicating the man’s fame as both a philosopher and physician. The Star of David, a menorah, a lion symbolizes strength, and an open book symbolizes knowledge. Above are the words, “Physicians Prayer”, formulated by Maimonides, and analogous to the oath of Hippocrates taken by physicians today.

Minted by the Medallic Art Company in both Bronze and Silver (.999) - both 44mm in diameter

In 1939 Belskie began working with Dr. Robert Latou Dickinson, specialized in medical illustration and realistic medical models, replicating not only organs in three dimensions and color but also how they feel. Their most famous collaboration, the Birth Series, was on exhibit at the New York World's Fair, 1939-40.

Because of this experience he was commissioned to create medals of medical interest, and ultimately, in 1969, a series of 50 medical medals for Presidential Art Medals. Belskie became typecast as a medical medal specialist.
Signed art works ABR.B or AB initials. [See also Notes on Cataloging.]

A museum in his honor containing medals, models, busts, finished bas-reliefs and sculptures was established in his hometown, Closter, New Jersey. Named the Belskie Museum of Art and Science, it was dedicated 11 September 1994 and is maintained by the Closter Lions Club.