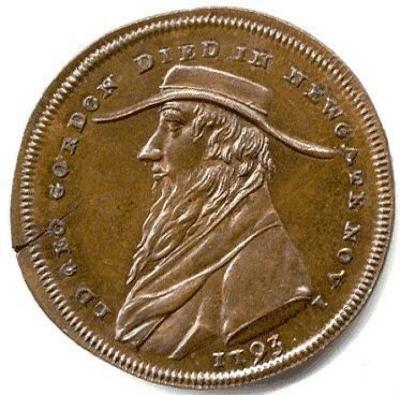 Description
Gordon Riots 1780. In 1778, parliament repealed harsh anti-Catholic legislation from the seventeenth century. In June 1780, violent anti-Catholic riots broke out in London as Lord George Gordon marched on parliament to present a petition requesting a return to Catholic repression. It took the authorities ten days to restore order. By that time, 12,000 troops had been deployed and over 700 had been killed. Gordon was tried for high treason but acquitted.

Gordon died in Newgate shortly after converting to the Jewish faith.

A most unusual ½d token issued by Thomas Spence the radical 18th century politician and follower of Thomas Paine was a token manufacturer and pamphleteer.  Spence invented his own phonetic language and is most remembered for his radical land redistribution plan. Spence was a keen fighter, though a man of around five foot high. His troubled features pay testament to his brawling! If he thought he had lost or couldn’t win a philosophical argument he was not averse to a fight with cudgels against his philosophical opponent.