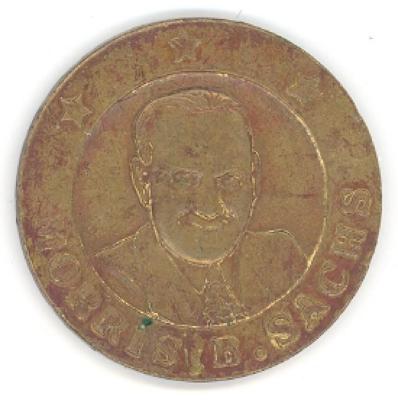 caption:
A bust of Sachs with “MORRIS B. SACHS” on the bottom rim

Description
Started out as a door-to-door dry goods peddler in Chicago's Back-of-the-Yards neighborhood and became the owner of a large clothing store in Englewood bearing his name. He also served as city treasurer under Mayor Martin Kennelly. As the sponsor of an amateur hour on radio from 1934 to 1957, his name became a household word among Chicago families.  Served as Delegate to Democratic National Convention from Illinois in 1956.