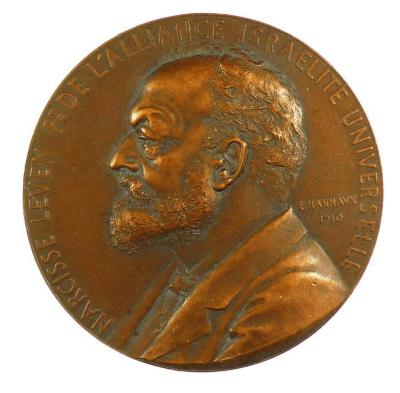 Description
Issued by the L’Alliance Israelite Universelle for the 50th Anniversary of the AIU.

The edge is marked "Bronze"

French lawyer and communal worker; born at Urdingen, on the Rhine, Oct. 15, 1833; educated at the Lycée Henri IV. and at the Faculty of Law in Paris. For five years he was the secretary of Adolphe Crémieux, and he was an active member of the group which opposed Napoleon III. and which included Jules Ferry, Spuller, and Hérold. During the Franco-German war he was general secretary of the Ministry of Justice, but he resigned on the retirement of its minister, Adolphe Crémieux, and has since refused all government positions. From 1880 to 1887 he was a member of the Municipal Council of Paris, of which he became vice-president.

Leven took an active part in the founding of the Alliance Israélite Universelle, becoming successively its secretary, vice-president (1883-98), and, after S. Goldschmidt's death, president. He is, in a certain sense, the historian of the Alliance, both through his clear and exhaustive reports and through the orations he has delivered at the funerals of his colleagues. For thirty-six years he has been a member of the Jewish Consistory of Paris, becoming its vice-president on the death of Michel Erlanger. He is a member also of the committees of the Rabbinical Seminary and the Ecole de Travail, and is president of the Jewish Colonization Association.