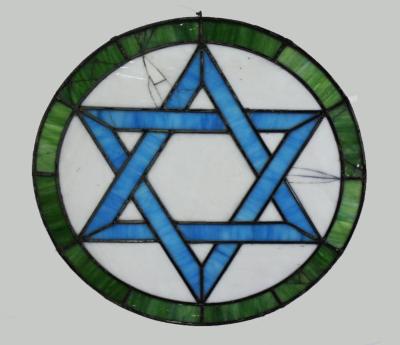 caption:
Circular light blue Star of David on milk-colored background with a green border. Originally used at the Nezhiner Synagogue in Philadelphia, PA.

Description
This stained glass window came from the Nezhiner Synagogue in Philadelphia, PA.

The Nezhiner Synagogue was founded in Philadelphia in 1889 as Ahavas Achim Anshei Nusach Ha-Ari – Brotherly Love Men of Nezhin, Liturgy of Ha-ari [Luria].

The synagogue was named after the city of Nezhin which was a city in the Chernigov region of Ukraine,first settled by Jews at the beginning of the 19th century.  The Tzaddik Dov Ber of Lubavich, the son of Shneur Zalman of Lyady, the “middle rabbi” of Chabad Chasidism, who died and was buried in Nezhin in 1927.  The town became a center of Chabad for the Ukraine.  It was especially well known when Israel Noah Schneersohn lived there from 1867 to 1882.

The Nezhiner Synagogue with its “nusach ari” (a more mystical way of worship, more like Chassidic rather than the Ashkenazic) was a sort of maverick in the neighborhood, and many of its members had to be converted from Ashkenazic rituals into which they had been born.

Over the 75 years of its history, the congregation spanned two significant generations; 1) the immigrants who found in it a spiritual home, social companionship and Americanization; and 2) their children who rose to leadership in Philadelphia and beyond.

The successor congregation to the Nezhiner synagogue, was Temple Beth Zion-Beth Israel.  (Beth Israel closed its doors in 1963 after 123 years, and merged with Beth Zion.)

By its original name, Ahavas Achim Anshei Nezhin Nusa Ha-Ari, the congregation is listed in the American Jewish Year Book for 1899-1900.  At that time, it was located on Third near Fitzwater.  Its founding date is listed as 1888, its name is spelled Anshe Nishin, and its rabbi as Rabbi Dr. Moharam.  It had forty seat holders; services morning, noon and evening, Saturdays and holidays, with a meeting every Sunday evening, and an annual income of $2,500.