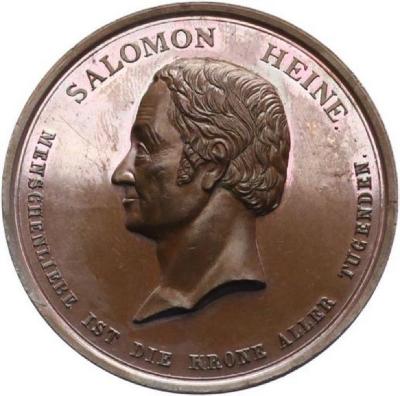 Salomon Heine & The Opening of the Jewish Hospital in Hamburg Medal

Salomon Heine, the great German merchant and philanthropist was born in Hanover in 1767.  Jews then could not become citizens, were subjected to expulsions, and denied admittance to most trade guilds.  Heine went to Hamburg when he was sixteen and practically penniless.  By 1797, he had become one of the chief members of Heckscher & Co., a leading Hamburg banking institution with whom he worked with until 1819, when he established an independent business which grew to be one of the most important banking firms in Europe.

He emulated the Rothschilds in extended his operations far and wide, devoting himself to dealing in foreign loans and stock ventures.  He was not embarrassed by the financial crisis of 1825, nor even by the great fire at Hamburg in 1842.  He was able to offer a million thalers on the loan market and was the only banker in Hamburg who continued to discount legitimate bills, thus saving the credit of the city’s trading community.  He even donated the insurance money paid on his mansion, which had been burnt down, to the fund raised to repair the damages caused by the fire which destroyed Hamburg.

He was refused citizenship and denied admittance to the Chamber of Commerce despite this public service and substantial subscription to the city’s rehabilitation loan and numerous charitable contributions including the building of a Jewish hospital which became known by his name.

Heine ably assisted his nephew, the famous lyric poet and essayist Heinrich Heine with a subsity sum amounting to 6,000 francs per year during his life in Paris, and left him a legacy of 16,000 francs.

Heine was an enthusiastic supporter of the movement for the emancipation of the Jews, and left specific directions that any Jewish institution to which his heirs might contribute should be thrown open to all persons without distinction of creed, when the Jews of Hamberg should be emancipated.

Salomon Heine is reported to have been worth 30,000,000 francs when he died in 1846.  His son Charles, who relocated the banking house to Paris, was able to considerably increase this fortune and left no less than 65,0000,000 francs on his demise.