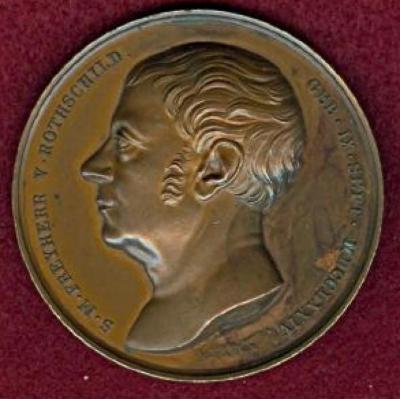 caption:
The front / obverse of this medal features a classical bust of Rothschild, designed by K. Lange, surrounded by his name and date of birth.

Description
This medal was struck and issued to commemorate the birthday of Salomon Mayer von Rothschild, a German-born banker in the Austrian Empire. S. M. von Rothschild was born on September 9, 1774 in Frankfort-am-Main, Germany, remaining there until he moved to Vienna, Austria in 1816. He became interested in Austrian finances, and was the financial originator of the Nordbahn Rail Transport network. He also invested heavily in the Austrian state loans of 1823, 1829, and 1842, the coal mines of Witkowitz, and the asphalt lake of Dalmatia. He was knighted in 1815 by the crown of Austria and created “Freiherr” in 1822. Salomon Mayer von Rothschild died in Paris, France on July 28, 1855, leaving two children to manage his branch of the family business.