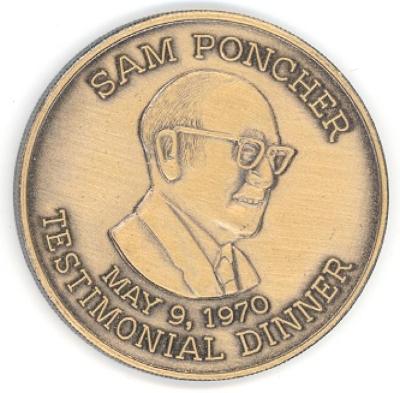 caption:
A right facing bust of Poncher, with “SAM PONCHER” on the upper rim and “MAY 9, 1970 / TESTIMONIAL DINNER” on the lower rim.

Description
In 1934, two entrepreneurial brothers, Sam and Abe Poncher, purchased a business spare parts for crystal radios. The innovations the Poncher brothers brought to this fledgling enterprise over the years to come earned them the title of "Fathers of Distribution." They named their business Newark Electric Company (after the site of the nation’s first and largest radio station, which broadcast from Newark, New Jersey) and set up shop on State and Randolph Street, Chicago’s "Radio Row."
The Ponchers pioneered many of the manufacturer-distributor policies which exist today and which helped to formalize the distribution industry. Between 1934 and 1968, Sam and Abe grew Newark from 800 square feet to a nationwide organization with 9 branches. Sam Poncher explained his success this way: "I guess I became the first industrial distributor in the world. It happened because I went out and asked for the business."