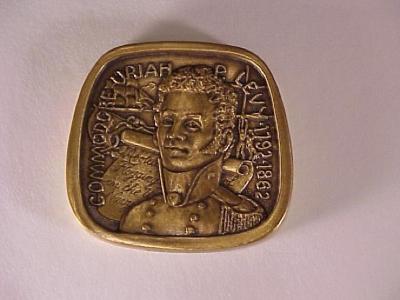 Description
Commodore Uriah Levy was an American, a sailor, and a Jew.  He is also recognized as a Navy reformer and is credited as being the father of historic preservation in the United States.

From the time he was 10 and ran away to joint the navy until his death at 70, the nay was Levy’s life.  During the War of 1812, he turned down the rank of midshipman to be sailing master of the Argus.  The ship became the “phantom raider” of the English Channel, destroying 21 merchant vessels.  Levy was promoted to lieutenant, but he didn’t get to enjoy it for long.  He and his crew were captured and locked up in Dartmoor prison for the rest of the war: his health never recovered.

Levy had other talents as well, making a fortune in New York real estate.  A great admirer of Thomas Jefferson and his efforts on behalf of religious freedom, Levy spent a large part of his wealth to buy Monticello in 1836.  By that time Jefferson’s heirs had let the magnificent mansion in Charlottesville, Virginia, deteriorate.  Levy, a competent carpenter, restored the house, brought back much furniture that had been sold, bought back much of Jefferson’s original acreage from neighbors and opened the estate to the public.  Levy is credited as the “father of historic preservation in the United States”.

Levy left Monticello to the “people of the United States”, but his family contested the will and the property fell into disrepair.  His nephew, Jefferson Monroe Levy, won the litigation, restored Jefferson’s showpiece, and reopened it to the public.  In 1923, he sold the house to the Thomas Jefferson Memorial Foundation.  Commodore Levy also commissioned a statue of Jefferson by the French sculptor David d’Angers.  It stands in the Capital rotunda, the only such work donated by a private citizen.

The navy paid tribute to Levy during World War II, naming a destroyer escort after him in 1943.  The Levy fought the Japanese in the Pacific with an impressive record of service.  The navy’s oldest Jewish chapel at Norfolk, was named the Commodore Levy Chapel in 1959.

Uriah P. Levy is honored with a medal in the Jewish-American Hall of Fame series, issued by the Magnus Museum.