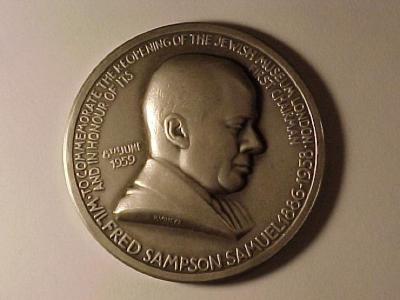 caption:
The obverse portrays a profile of Wilfred Sampson Samuel, with the inscription “To Commemorate the Reopening of the Jewish Museum London and in Honour of its First Chairman”, along with the dates of his birth and death.

Wilfred Sampson Samuel was born in England in 1886.  He is remembered as one of the foremost Jewish historians.  His book, The First London Synagogue of the Resettlement, published in 1924, documents his research on the Sephardic community in London, categorizing the story of the beginnings of the London Jewish community in a new perspective.

The Transactions of the Jewish Historical Society of England was the recipient of several papers by Samuel on both Jewish English settlement as well as of Jews in the West Indies.  His research brought forth much of the history of the Spanish-Portuguese Bevis Marks Synagogue.

In 1924, together with Cecil Roth, Wilfred Sampson Samuel jointly founded the Jewish Museum in London.  Samuel served as first chairman of the museum until his death in 1958.  The museum, located in Adler House, is named for the late Chief Rabbi of England, Hermann Adler.  Amongst items which would normally comprise the inventory of a Jewish museum is a splendid collection of tokens, coins and medals of Judaic significance.

The museum relocated to new quarters, with a dedication ceremony held on June 8th, 1959.  Without any doubt, Wilfred Sampson Samuel played a major part in this relocation.  It was unfortunate that he passed away shortly before.  The museum has again been relocated to newer quarters at Raymond Burton House.