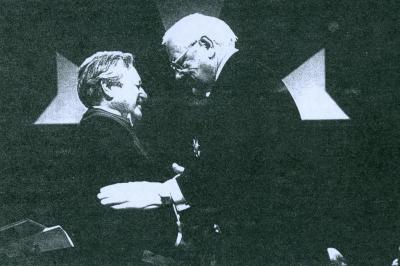 Description
On May 4, 2002, at their 38th Convocation, Rabbi Herman Schaalman was appointed a Laureate of the Lincoln Academy of Illonis. One of six people appointed that year, he was the only one recognized for a role in religion. The first photoraph is of Rabbi Schaalman and Governor George H. Ryan.

More information about the award can be found on the Lincoln Academy of Illonis website.