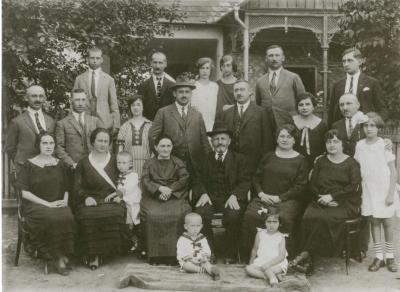 Description
Photograph was taken in the early 1920s in the yard of the L-shaped house where Anna Brünn (Ornstein) lived for the first 17 years of her life. In the other part of the two-family home lived her grandparents and her Uncle Louis with immediate family.

Her grandparents (front row) had right children: six sons and  two daughters. Most of them and their wives are in this picture Isidor, Hermina, Samuel, henry, William (Anna's father on the far left, in front of him is her mother), Joseph, Louis, Margit (Miriam, Imre Blumberger's mother). Most members of the family died in Auschwitz. Two uncles and about six cousins survived and lived in Israel.

From the personal collection of Dr. Anna Ornstein.