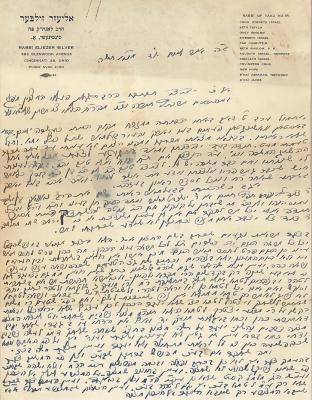 Topics
Questions in Halacha (Jewish Law); Letters to and from Rabbi Silver

Description
The Correspondence begins with a typed letter from Ahron Chaim Halevi Zimmerman:

The honor of my friend the great Gaon master of the Torah and the head of all people in the diaspora Rabbi Eliezer Silver.  Today in my house was my friend Rabbi Eliyohu Chaim Blum and I thought in my mind that it would be a good thing that he should get recognized and be shown in front of the head crown [editors note: this is a reference to Rabbi Silver] with his daughter because I know that he [Rabbi Blum] is someone who is constantly learning and is fluent in Torah, wisdom and ethics and he is from the chosen and rabbinically ordained students of the school of Rabbi Yitzchak Elchonon of blessed memory, and he is currently a Rov in New York. If your honor agrees to meet him and his daughter please tell me.  The meeting can be in my house or in whatever place your honor chooses. I have spoken with the young man about this and I told him that I would ask your honor his knowledge of this.


As an aside I have a small insight in the portion of Masechta Negaim which I am studying now.  If you look at the mishnah in chapter 2 mishnah 2 it says the following:

We do not examine negaim [editors note, which are blemishes on the skin] in the early morning, nor in the late afternoon, nor inside the house, nor on a cloudy day because what is dull - which really makes him pure - appears bright which makes him impure. Nor do we examine negaim in the middle of the day because what is bright appears dull. So asks Rabbi Zimmerman to Rabbi Silver that this is problematic from somewhere else where it says that a Kohen can render someone pure in the early morning and he can render someone impure in the middle of the day? I saw the Chazon Ish in Hilchos Negaim (editors note: this is still Rabbi Zimmerman talking] that writes that it is a law of scripture in the posuk that says "to all the eyes of the Kohen" that even in an opposite case the law would be the same.  But this does not seem right to me because the posuk is only an ashmachta - a source that the sages relied upon and the Rambam when he brings this law of seeing it only wrote it because of the mishnah and not because of the posuk.  But maybe you can say that he is not obligated to see since if he sees he will need to proclaim it impure in the morning - which he can't do.  But it is still problematic what would be the law if such a thing does happen and he does see it in the morning does he have to then proclaim it impure? It is also problematic the main law how it is - If he is obligated to go to the Kohen or the Kohen must come to him - and if it can be against his will.  I was not able to go into the depths of this but I think I saw some of this in the sefer Ohr Hameir of Rabbi Meir Shapiro [editors note: he was the founder of Daf Yomi] but I do not have that sefer by me now.  And certainly your great honor will tell me his opinion which is the opinion of the Torah - as no secret is hidden from you.


Rabbi Silver’s response has not yet been translated.