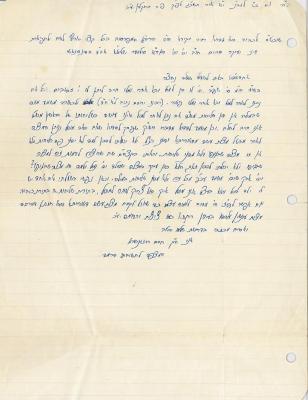 caption:
The letter is translated as follows:


To the honor of the great and precious man - the Rov who is known in all corners of the earth for his great name and splendor - who is like Mount Sinai and uproots mountains [editors note: this is the language the Talmud/Gemara uses on a very great person] Rabbi Eliezer Silver the head of the Bais Din in Cincinnati


I have come to ask an important question.  In Shulchan Aruch Choshen Mishpat in siman 382 it says the following:  If a person had a son that he had to circumcise and a different person came along and circumcised him,  the second person is obligated to pay the first person ten gold coins.  [editors note: which is the law when someone grabs a mitzvah away from you]  But continues the Shulchan Aruch, if I have a son that I have to circumcise and I gave the child to someone else to circumcise (i.e.a mohel) and then a different person came along and circumcised him, in this case the second person is not obligated to pay the first person ten gold coins.  It seems from here that by circumcision there is no law of shlichus.  (editors note:  shlichus means that I am obligated to do something and I have a messenger on my behalf do it for me and it is considered as if I did it] and therefore if I give my son over to someone else to circumcise him, that person is not acting as my messenger and thus if someone grabs the mitzvah away from him he is not required to pay ten gold coins.  It also sounds this way from the Shach over there who rules that if the father of the child is a mohel and he gives over the mitzvah to someone else to do, he has transgressed a positive commandment of the Torah.  [editors note: because if there is a law of shlichus by circumcision so why when I give over my son for someone else to circumcise do I transgress a positive commandment?  That person is merely a messenger of me and it is like I did it?  So must be that by circumcision there is no law of shlichus].  I do not understand this.  Shlichus works on anything except for on a mitzvah that is incumbent on ones’ body and circumcision is not one of those?  I saw in the Ketzos Hachosen that he wants to say that circumcision is a mitzvah that is incumbent on ones’ body but I do not understand this because the real mitzvah is that the child should be circumcised-not that the body must make sure that it gets circumcised?  Nevertheless we see one way or another that shlichus does not help by circumcision.  Here my soul is asking the following:  If a person has a child that he must circumcise and he himself is not a mohel and he must therefore ask someone else i.e. - a mohel - to do it for him how should he tell the mohel to do the circumcision - as a messenger or just as an honor?  Also according to this he would have to teach himself the laws of circumcision since it is a mitzvah incumbent on ones’ body and at a time of anger you get punished on certain mitzvos like tzitzis for example.  I will end my letter with seeking your peace [editors note:  another way of asking how are you]

I am the bochur Chaim Rosenberg who waits for your great answer.