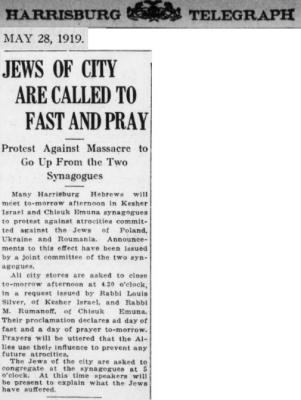 Many Harrisburg Hebrews will meet tomorrow afternoon in Kesher Israel and Chisuk Emuna synagogues to protest against atrocities committed against the Jews of Poland, Ukraine and Roumania. Announcements to this effect have been issued by a joint committee of the two synagogues.

All city stores are asked to close tomorrow afternoon at 4:30 o’clock, in a request issued by Rabbi Louis Silver, of Kesher Israel, and Rabbi M. Rumanoff, of Chisul Emuna. Their proclamation declares a day of fast and a day of prayer tomorrow. Prayers will be uttered that the Allies use their influence to prevent any future atrocities.

The Jews of the city are asked to congregate at the synagogues at 5 o’clock. At this time speakers will be present to explain what the Jews have suffered.