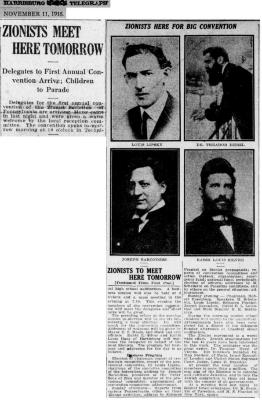 Delegates for the first annual convention of the Zionist Societies of Pennsylvania are arriving. Many came in last night and were given a warm welcome by the local reception committee. The convention opens tomorrow morning at 10 o’clock in Technical high school auditorium. A business session will also be held at 2 o’clock and a mass meeting in the evening at 7:30. This evening the members of the convention committee will meet the delegates and short talks will be given.

The presiding officer at the opening session tomorrow will be Robert Rosenberg, a local attorney. He will speak for the convention committee. Addresses of welcome will be given by Mayor E. S. Meals, and State and city officials. Rabbi L. Silber and Rabbi Louis Haas of Harrisburg will welcome the delegates in behalf of the local Zionists. The program for business and addresses for the day is as follows:

During the morning session school children will march to the auditorium. Arrangements have also been completed for a dinner to the delegates Sunday afternoon at Chestnut street auditorium.

The Zionist movement is a world wide effort. Jewish organizations for the last 40 years have been interested in this work. The originator was the great writer, Dr. Theador Herzl of Vienna. His followers included Dr. Max Nordaw, or Paris, Israel Zanquill, of London and United States Supreme Court Judge, Louis D. Brandeis.

At present the total number of members is more than a million. The real aim of the Zionists is to colonize and cultivate Palestine, and to turn the Jewish emigration to their old home with the consent of all governments.