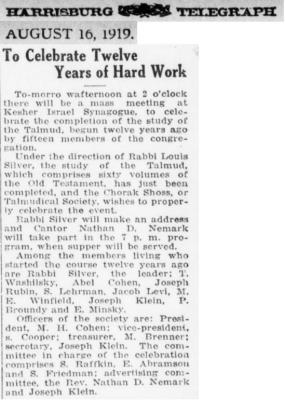 Article Regarding Rabbi Eliezer Silver Leading the Completion of Learning of the Entire Shas in Harrisburg, PA in 1919

Tomorrow afternoon at 2 o’clock there will be a mass meeting at Kesher Israel Synagogue, to celebrate the completion of the study of the Talmud, begun twelve years ago by fifteen members of the congregation.

Under the direction of Rabbi Louis Slver, the study of the Talmud which comprises sixty volumes of the Old Testament, has just been completed, and the Chorak Shoss, or Talmudical Society, wishes to properly celebrate the event.

Rabbi Silver will make an address and Cantor Nathan D. Nemark will take part in the 7 p.m. program, when supper will be served.