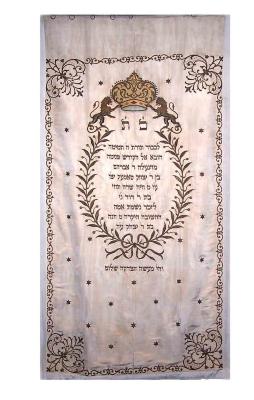 Translation of Hebrew text within laurel wreath:  "The Crown of the Torah/ In honor of God's perfect Torah/ Brought into the inner sanctum/by the exalted R. Avraham/ Son of R. Yitzchak Samek (may his Creator preserve him and grand him life)/ and his wife, Chaya Sarah, may she live/ Daughter of R. David, may his light shine/ In memory of her mother/the esteemed and precious Channa/ Daughter of R. Yitzchak, may he rest in peace/”

Description
Josephstadt Synagogue was built around 1890 in the Renaissance Gothic style, designed by Leopold Baumhorn.  Timosoara was an important Zionist center, and headquarters of the Zionist Organization, the JNF and the Palestine Foundation Fund.  Between WW I and World War II the community suffered from anti-Semitism.  The Jewish population (10,950 in 1940) increased to 11,788 in 1942 because many Jews from surrounding areas were concentrated in Timisoara.  In 1944 the Germans took action against the Jews.

The Ark Curtain and Torah Mantle were acquired by Hillel for its permanent collection from members of the Timosoara community.  The items had been selected by the Nazis, confiscated, stamped and destined for shipment to Prague.  The plans for the Nazis Jewish Museum were foiled when, in 1944 the Red Army entered the city.