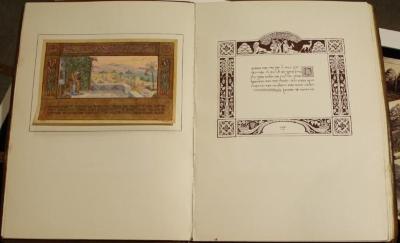 Song of Songs from Bezalel School, 1949

caption:
Book, Song of Songs from Bezalel School, Leather-bound edition of the Song of Songs, with illustrations in colored inks, c. 1949.

Description
Created at the Bezalel School in Jerusalem.

The Bezalel School, a school for the study of arts and crafts in Jerusalem (now regarded as the national institution for the study of arts and design in Israel) was founded in 1906 by the sculptor, Boris Schatz, who had been court sculptor to King Ferdinand of Bulgaria.  Schatz named the school after the Biblical artisan Bezalel, appointed by Moses to construct the tabernacle and its appointments in the wilderness.  He intended the school as a center that would revitalize the cultural life of the Yishuv (the Jewish settlement in Eretz Israel before the founding of the state.)  He brought six of the first students with him from Bulgaria, and installed the school in a romantic, crenellated stone structure built as an orphanage at the turn of the century.
Each fine arts student was required to learn a craft and, if possible, to play an instrument.  Initial financial support came primarily from Otto Warburg and a group of German Zionists who also helped to find outlets for the items produced at the school.
The school fell on hard times when support from Germany failed during World War I, and Schatz, together with other public figures, was held hostage by the Turks.  Upon his release, Schatz left on a fund-raising mission, by which he succeeded in reconstructing the school.  He made several visits to Cincinnati, and presented lectures and exhibits at the Hebrew Union College, which owns s number of his works, some of them on display at the Skirball Museum.
Schatz died abroad and the school was closed in 1932, but reopened the following year when a new wave of immigrants from Hitler’s Europe created both the need for such an institution and a new impetus.  It also supplied the nucleus of a new staff.  In 1963, Dan Hofner, a Bezalal graduate, became director of the school and modernized it, emphasizing the department of design.  He also created an associated museum.  The student body grew from twenty-six to several hundred today.