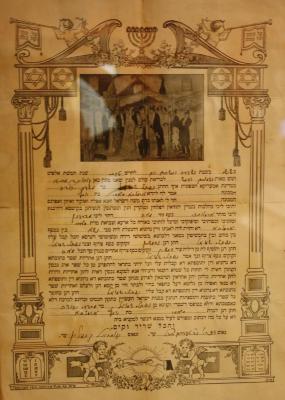 caption:
Cleveland, Ohio wedding of Naftali Shmuel ben Mordechi Yehuda marrying the widow Sussie bat Yossef on the 27th of Tevet 5675 (the date on the Jewish calendar equivalent to January 13, 1915).
Chuppa Ceremony (Jewish Wedding Scene) depicted above text detailing the obligations of the groom to the bride during the marriage, conditions of inheritance upon his death, obligations regarding the support of children of the marriage, and terms for the wife’s support in the event of divorce.