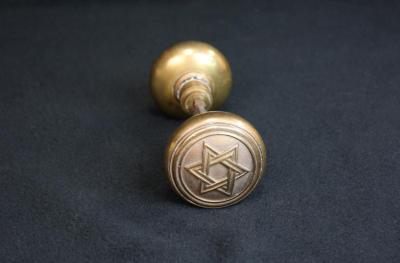 caption:
Solid brass doorknob with slightly convex handle on which a Star of David is etched in bas relief.  The double lines of the Magen David are interwoven.  The doorknob is complete with the dowel and inner knob attached. It is from Temple Israel in Brookline, MA.

Description
Located along the Riverway, on the border of Brookline and Boston, Temple Israel, is the second oldest Reform congregation in New England.  Founded as Congregation Adath Israel in 1854 by German members of Temple Ohabei Shalom.  They split with their Polish coreligionists over ethnic and ritual differences, establishing its first home on Pleasant Street in the South End the same year.  In 1859, the board purchased land for a cemetery in Wakefield, and began weekly instruction in German and Hebrew for the temple’s children.

In 1972, the congregation laid the cornerstone for a new sanctuary next to its meetinghouse on the Riverway, reflecting its continuing growth.  Completed the following autumn, this structure remains the temple’s home today. Temple Israel celebrated its 150th anniversary in 2004.