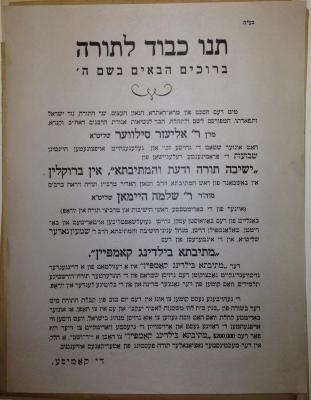 caption:
[Hebrew: Give honor to Torah
Blessed are those who come in the name of H’]

With the approval of the resident scholar, the great ga’on [learned one], prince of Torah, supporter of Israel in its magnificence, his name well known in praise, Chief Rabbi of the Agudah of Rabbis of the USA and Canada
Our teacher R’ Eliezer Silver shlit”a
Has provided our city the great honor and opportunity to receive this Shavuos the prominent delegation from
Yeshiva Torah Vada’as and its Mesivta [rabbinical college]

In place of the head of the Mesivta, the learned, praised disseminator of Torah and known to many
R’ Shlomo Heimann
[one of the most esteemed roshei yeshiva and disseminators of Torah in Europe]
accompanied by the most renowned public figure, great authority on society and revered, talented interpreter, head of the ** yeshiva and Mesivta, R’ Shimon Geder, shlit”a , in the interest of the
“Mesivta Building Campaign”. [transliterated into Yiddish from English]

The “Mesivta Building Campaign” is a result of a noteworthy necessity following the great tide of Torah-thirsty students from the entire country and the bloody lands in Europe.

The eminent guests come to us on this holiday of receiving the Torah with the tidings of ,“building a house for Hashem, a Sanctuary for our father Yaakov” and it is hoped, that our respected congregation which is honored with such a leader of Yisroel, will know how to receive these guests and show the greatest warmth to their call for the $200,000 “Mesivta Building Campaign” to have a “yad-vashem,” a share in the most important national  fortress of Torah of American Judaism.