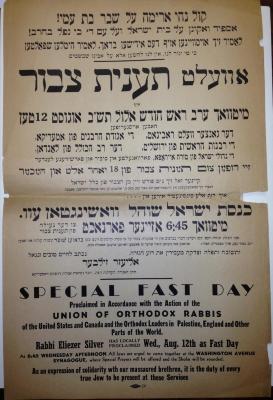 caption:
The Poster is written in Yiddish, Hebrew and English.  The translation is as follows:

[Hebrew:] Eulogize and mourn for the house of Israel and the people of Hashem who fell by the sword

Let us cry out for the Jewish disaster, let us split the heavens

The rabbinate of the entire world, the Union of Rabbis of America, the head rabbis of Jerusalem, the Chief Rabbi of London, the “g’dolei Yisroel” from Eastern Europe dispersed in Siberia and various countries, have called out

I call all Cincinnati Jews to
Knesses Yisroel Shul Washington Ave.
Wednesday 6:45 in the evening to the ne’ilah of the public fast
After mincha service we will talk divrei chavushim** and in the ancient custom at mincha of a public fast we will blow the shofar ten times and also  recite special prayers for Yom Kippur Kattan.
The weak, for whom it is hard to fast, should ask the question of a wise one
[Lines above signature in Hebrew:
But repentance, prayer and charity remove the evil of the decree {from Yom Kippur mussaf}             May we be inscribed for a good life and redeemed]