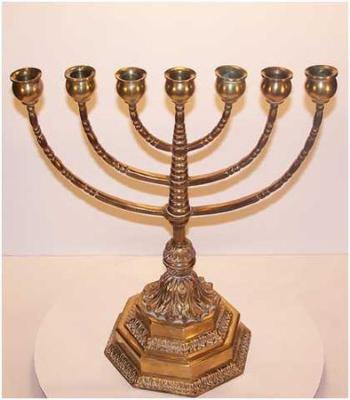 caption:
Menorah from Germany/Austria; The candleabrum were a gift from Elizabeth Wilson to her friend Rebecca Baer Krupp of Louisville, Kentucky.  Wilson, a Christian, assigned to the American Field Service in post-World War II Europe, came across one of them in a destroyed synagogue in Austria and found the other are almost identical one in a rubbish heap on a Berlin street.  Ms. Wilson sent them to her Jewish friend, Mrs. Krupp, in Louisville, where they remained for over sixty years. Upon her death, the candelabrum were donated to University of Cincinnati Hillel.

Topics
Items on Display; Hanukah (the Festival of Lights)