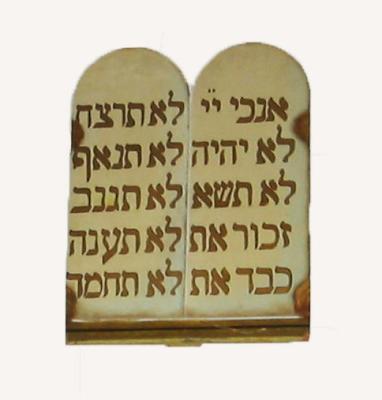 caption:
When Congregation Bene Israel moved from its 3rd location at 8th and Mound (1869-1906), it became known by the name of the street on which its new building stood:  Rockdale Temple.  Congregation Beth El, an Orthodox synagogue, began to hold services in the basement of the Mount Street building.  The tablets, which were part of the Mound Street Synagogue, may date back to the Mound Street Temple.

Description
Tablets of the Ten Commandments, in Hebrew, with 4 places on the tablets, which indicate the presence of lion’s paws.  The original lions have disappeared.