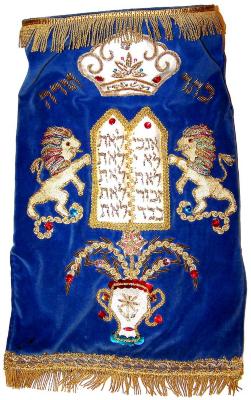 Description
The Sefer Torah is known to have been ornamented and protected with various adornments and wrappers from earliest days.  The Mishnah discusses “figured wrappers” that covered Torah scrolls.  The Roman liturgy includes a prayer for “every daughter of Israel who makes a mantle or cover in honor of the Torah.”  In some communities, a length of fabric known as a mappah is rolled with the Torah to cover the outside of the area opened for reading.  A textile cover may also be placed over an open scroll.  The closed scroll is covered with a mantle, generally of fine silk or velvet.  Extant full-skirted mantles are known from Sephardi communities.  Early Ashkenazi mantles were flat, joined segments of fabric, resembling pillowcases, with spaces at the top for the staves.  Most Ashkenazi mantles today feature a rigid oval top, and a tight, straight skirt often decorated with dedicatory inscriptions and symbols.