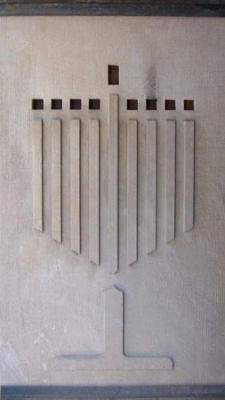 caption:
Two limestone slabs with contemporary nine-branched stylized menorah in bas-relief.  Each "arm" is topped by a two-inch-square opening, through which an illuminated bulb could broadcast the specific Chanukah night.

The menorot were built into the facade of the former movie theater on either side of the entrance, probably in the area originally designated for cinema posters.  They were removed from the Bond Hill Building in September, 1996 under the direction of Hillel Board Member Michael Heines.

Description
Congregation Beth Hamedrash Hagadol was founded in Cincinnati in 1886 as an Orthodox Russian congregation by the Block brothers from Lithuania.  Its first place of worship was an upper floor downtown on Fifth Street between Plum and Central, where it remained for almost nine years.  In 1895-96, the congregation bought and the Block Brothers remodeled a Protestant Church at 718 and 720  Kenyon Avenue in the West End.  The building is gone, but a photograph of it is available at Hillel.

The Rabbi of Beth Hamedrash Hagadol during this period was Rabbi Abraham Jacob Gershom Lesser, first President of the newly formed Union of Orthodox Rabbis of the United States and Canada.  He served both Beth Hamedrash Hagadol and Bet Tefillah, and a number of other Orthodox congregations in the community from 1898 until his death in 1925.

In 1955, the Bond Hill Synagogue was formed and moved into a former movie theater that had been refurbished to serve as a synagogue.  The building on Reading Road and California Avenue in Bond Hill was dedicated September 4, 1955. It is still standing. Rabbi Leib Potashnik was then serving as spiritual leader.

Beth Hamedrash Hagodol had also maintained a cemetery in Covedale.  In the winter of 1995, plans were being made to tear down the chapel at the Covedale cemetery.  Hillel Jewish Center acquired several items from there, including part of an ark, large marble memorial boards and brass and enamel nameplates.