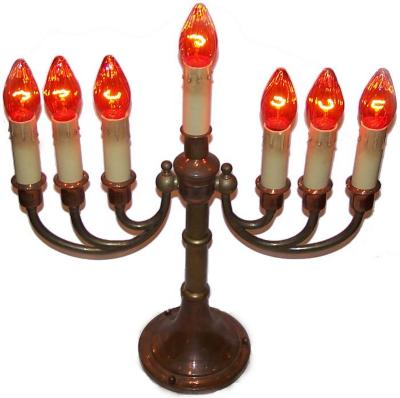 Description
The style, typically European, is institutional in character for synagogue use.

The seven-branched Menorah (lamp) is one of the most familiar Jewish symbols, and is found in synagogue decorations and tombs from the first century on.  The Bible describes its original design as revealed to Moses on Mt. Sinai.  It consisted of three branches, one on each side of a central shaft, with almond-blossom cusps and other specific details.  In the Tabernacle, the Menorah was situated in front of the veil on the south side of the structure.  In Solomon's Temple, ten menorot led the way to the entrance to the Holy of Holies.  These were destroyed by the Babylonians in 586 B.C.E.  The Menorah depicted on the Arch of Titus purports to be a representation of the one in the Second Temple, but research has suggested that it differed from the original, and is an imaginative reconstruction by the Roman conquerors.  Nevertheless, it is the image that was adopted for the emblem of the State of Israel.