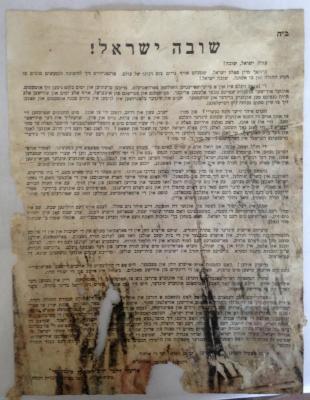 caption:
By the grace of G-d

Awake my nation Israel. Stand prepared for the Master of the Universe. Arrange yourselves for repentance and good deeds, to strengthen the Torah, and to belief. Return O’ Israel!

The entire world is lost in a fire-spitting cloud. Rivers of tears and seas of blood flow everywhere. Our Jewish misfortune, however, carries everyone over. Perplexed and downtrodden from all over, on all seas and between all animals, do we find our brothers and sisters. Elders and children wander and run in great danger everywhere and cannot locate a place of peace.

Do you hear their cry? From east and west, north and south, they call upon us. With pleas they stretch out their arms to us, our beautiful children who (missing) in a sea of troubles, needs and pain. Scary is the Jewish situation. Woe unto us. The entire Jewish nation comes to the heavenly gates with a sky-piercing, warm prayer: until when, Master of the Universe? How much longer will you allow your Jewish nation to be open to ridicule and spite? How much longer will our land be desolate, and our holy temple? How much longer will you tolerate the Ravens and the wild beasts, the falsehood and lies of the lowly leaders of the world? Until when, Hashem, until when?

Our sages tell us however, if a person sees troubles coming on himself, he should take account of his actions. Let’s account for our actions. Let’s stop going in strange ways. Let’s make a soul-accounting. Now in the days of will and mercy, when the gates of repentance are open, and the Master of the Universe calls out: return Israel, return sons. Let’s heed to the call and let us and our children unite as one nation with one Torah with one belief and with one hope. Young and old, begin repentance and good deeds.

We will search our ways. I call out to my nation let’s go in the paths of our fathers. Purify the mini-temples, the study halls. Pray in kosher Shuls, distance yourselves from temples. How can you pour your hearts out in the places that the Jewish sages have banned. It is not a House of G-d where men and women pray on the same level. It is the ways of the gentiles like an idol. No G-d fearing person is allowed to pray there or lecture there. Don’t send our brethren astray. Don’t deny the ban that applies to such temples. Come to the orthodox Shuls, where the wells of Torah and Mitzvahs flow, where Jewish giants are allowed to enter.

Shabbos is the foundation and soul of our religion and faith. Don’t make it profane. Live on the holy Shabbos. It gives life to the spirit, affects the soul. Employ more Shabbos-observers, strengthen their hands. Without Shabbos there cannot be Judaism. Don’t extinguish the Jewish candle. Have faith in G-d, and in the merit of Shabbos you will be redeemed. “If only they kept Shabbos twice, they would immediately be redeemed”.

Raise you children with the purity of holiness. Send your sons to the parochial schools to the Yeshivas and to the religious day schools and Cheders, and your daughters to the Beth Yaakov (house of Jacob) schools where they teach Torah and Mitzvahs. They come out of there as national Jews. Strengthen the study of Talmud in the day schools. Older ones should learn the Daf Yomi. Study, young and old, at home and in Shul. Unite with all Torah-Jews around the world. Found groups for Talmud study, and groups for Mishnah and Chumash. Found Cheders and Yeshivas and Beth Yaakov schools. Chase away our greatest enemy, ignorance.

Beloved Jews! Have mercy on your sons and daughters. Guard the holiness of your homes. Don’t defile your tables with non-kosher. Keep the cleanliness of Jewish foods. Kosher is one of the foundations of the religion.

Family purity has to be kept by our wives not to blemish our families. The Jewish lineage was clean. Our children acquired clean souls, don’t ruin them. Don’t stumble in the laws of purity. The Jewish family needs to be kosher.

Chase away the reform movement which made destruction in the Jewish (missing) and deteriorate the keeping of the Torah and the religion. Return yourselves to the Torah-giants and to the ancient Jewish source. Now is a time for repentance. Enough already with the spreading of ignorance. Out with the idolatry and atheism. Accept the (missing). Support with a full hand the Torah institutions in this land and in the land of Israel. Help save the (missing) and the students from the bloody lands. Help the activists of Agudath Israel, those that sacrifice themselves for Torah and for our holy land. Support the “redemption of the land”, the “establishment fund”, the “Torah fund”, the “Vaad Hatzalah”, the Beth Yaakov schools and (missing) Rov (missing). Support the dutiful home of our Agudath Israel Youth, (missing) and Pichei Agudath Israel. Support the Yeshivas, (missing) to train Judaism. Support the Ezras Torah (Torah-help) who rescue our families of Torah scholars from the old home. Raise the respect of Torah and its scholars.

And may you speedily be inscribed and sealed for long and good life.

Eliezer Silver, Rov to the Union of congregations, Cincinnati

President of Agudath Israel in the United States and Canada.