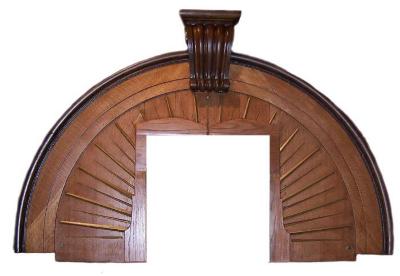 caption:
The original Decalogue tablets were removed at some point in the building’s history (probably in the mid 20th century), but the semicircular frame remained.  The original Decalogue (represented in outline in the composite piece) was replaced by one from the old Hillel building at the University of Michigan in Ann Arbor.

In 1998 when the Revelation Baptist Church was undergoing renovations, Hillel Director, Rabbi Ingber, was able to rescue the frame but was unable to locate the original Decalogue.

Description
A semi-circular decorative Decalogue frame with raised rays emanating from a central Decalogue (which is missing) to a border which is framed in a darker wood.  The light wood frame is surrounded by a heavy wooden molding that has a central decorative keystone.  Architecturally the overall design mirrors the exterior of the synagogue building.