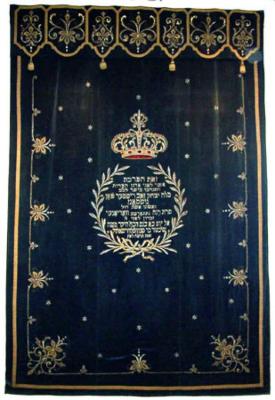 caption:
The central motif is a laurel wreath on a blue-green velvet background with heavy gold metallic scrollwork.  The lining is light blue linen. Atop the laurel wreath is a red velvet Torah crown studded with pearls and glass jewels. Within the laurel wreath is the inscription in Hebrew:  “This ark curtain/which is before the ark of the law/was donated graciously by/Mr. Isaac Zev Ritter von/ Guttman/ and his wife (woman of valor) Mrs. Ranna nee Wodianer/as a remembrance before God/of the day that their beloved son Moses/became a Bar Mitzvah the 9th day of the month of Elul/in the year 5645 (1885) as we reckon the years.”
The Parochet includes an attached scalloped valance (Kapporet) that is decorated with four ornate four-inch bell pulls.

Description
The curtain (Parochet) customarily adorning the Torah ark made its first appearance in the fourth century. It may have been intended as an allusion to the veil, which partitioned off the Holy Ark in the Tabernacle and in the Temple in Jerusalem.  In many Sephardic congregations, it is placed behind the Ark doors; in Ashkenazi congregations, it is placed in front of the doors.  Some synagogues use a colored curtain throughout the year, but replace it with a white veil on the High Holy Days.

Since very few pre-Renaissance examples of Ark curtains survive, scholars have concluded that early Ark curtains must have been extremely simple; probably only a simple piece of protective cloth.  It is thought that the stress placed on the Ark curtain during the Renaissance was not so much for ritual as for aesthetic reasons.  The Jews, knowing they were never really homeless as long as God was with them, tried to make His house as beautiful as they could.  Often it was difficult because they were deprived of livelihood and driven out again, to make their way again and to build anew their house of God.  Thus it became almost a compulsion to surround their few sacred objects with as much splendor as possible. Jews participated in the textile industry, so they were able to combine their commercial opportunities and their love of the synagogue to create magnificence in ritual decoration.

Wilhelm Isak Wolf Ritter von Guttmann was born August 18, 1825 in Leipnik, Moravia.  He died and was buried on May 17, 1895 in Vienna’s Central Cemetery.  In partnership with his brother, David (1834-1912), he founded the firm of Gebrueder Gutmann (1853) which eventually controlled the bulk of the Austro-Hungarian coal trade, at first selling
imported coal and later acquiring ad developing coal seams in the Ostrava basin and in Galicia, thereby improving considerably the monarchy’s trade balance.

Founder of the Oesterreichischer Industriellenklub and a member of the board of the Creditanstalt, Wilhelm was a member of the Lower Austrian Diet, where he supported German liberalism.  Both brothers were knighted.  Wilhelm in 1878 and David a year later.  The Gutmanns were also active in Jewish affairs.  Wilhelm was president of the Vienna Jewish community (1891-92) and belonged to the Stadttempel because he was president of the IKG (Jewish community).  David was head of the Israelitsche Allianz in Vienna and the Baron de Hirsch school fund for Galicia.  They were cofounders of the Israelitische-Theologische Lehranstalt.

Wilhelm’s first wife, Leonore Latzko, with whom he had several children, was born in 1827 and died in 1867.  Ida Wodianer, his second wife, was born in 1847 and died in 1924.  Wilhelm had several children: four sons (Berthold, Max, Moritz and Rudolf) and five daughters (Berta, Rosalie, Helene, Marianne, and Elsa).  Moritz, the son of Wilhelm and Ida Vodianer was born on April 7th, 1872.  The Ark curtain was donated in honor of Moritz Ritter von Gutmann’s Bar Mitzvah in 1885.

At the beginning of the 19th century, the Jewish community was given permission to build a synagogue under the condition that the building would not be seen from the street. The architect was Josef Kornausel.  The synagogue was considered at the time as one of the city’s innovative edifices and it served as a model for other synagogue buildings in Western Europe.  It became the first official Ashkenazi communal synagogue.  The prayers were conducted according to the Reform practice.  The cornerstone was set at Seitenstettengasse 4 on December 12, 1825 and on April 9, 1826 was consecrated by Rabbi Isak Noa Mannheimer.  Composer Franz Schubert composed Psalm 92 for the dedication. For the first time since their exile in 1670, the Jewish population of Vienna had triumphed in erecting a spiritual and religious center combining a synagogue, school and ritual bath.

In 1826 Salomon Sulzer was appointed to the office of Head Cantor of the Viennese Synagogue, which he served in for 56 years.

The interior of the synagogue was slightly damaged during the Kristallnacht (9-10 November 1938).  After the war, the Stadttempel was the only synagogue in Vienna that had not been destroyed during Kristallnacht.  It was repaired in 1945.  In 1946 a 120th anniversary public prayer was held in it, in the presence of cabinet ministers to commemorate the dedication of the synagogue.