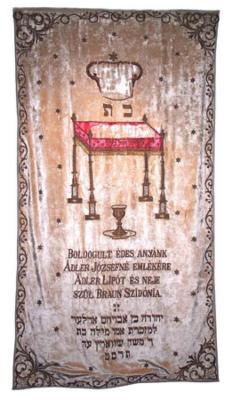 caption:
Description          This ivory brushed velvet Torah curtain, backed with linen, shows the outline of a heavily embossed, appliqued Torah crown, now removed, above the acronym for "Crown of Torah" embroidered in heavy gold thread.  Beneath these items is a large appliqued wedding canopy (chuppah) of magenta silk, supported on four heavily brocaded columns.  The canopy is embellished with hanging gold tinself threads and the words Kol Chattan v'Kol Kallah ("the sound of the bridegroom and his bride") from the wedding liturgy.  Beneath is a large fluted wine cup on a symbolic tray.  The text in Hungarian follows:  Boldogult Edes Anyank/Adler Jozsefne Emlekere/Adler Lipot Es Negje/Szul. Braud Szidonia.  It is followed by Hebrew, rendered in English as "Donated by/Yehuda the son of Avraham Adler in memory of his mother Milah the daughter of /Rabbi Moshe Schwartz, of Blessed memory/5669

Wedding themes dominate this rare Hungarian ark curtain.  The curtain adorned the Great Synagogue of Szolnok on Shabbat mornings when a bridegroom was called to the Torah for his aufruf (The calling up of the groom-to-be for an aliya in anticipation of his marriage).  The center part of the Torah Crown and the top part of the wedding canopy have been crudely cut out.  It is believed that these pieces were removed by Jews who, having to leave their synagogue behind, were determined to preserve a saving remnant of their rich communal history.

This parochet, saved from the ravages of the Holocaust, was acquired and restored by the Ornstein and Hornstein families.

Description
The Jewish community of Szolnok, in east central Hungary, dates back to the 1830s. At first they were only allowed to enter the town on market- days and in accordance with the regulation, they had to leave before nightfall. The first congregation was officially founded in 1850 and births only began to be registered after 1851.  The first Jewish settlers were merchants but a layer of intellectuals, civil servants, lawyers, doctors and entrepreneurs soon emerged.  Most Jews settled in the area extending from the town center to the Tisza River.  They had two synagogues, schools and other institutions.  Today there is still a small, active congregation.
The former great synagogue at 2 Templom Road in the park by the river (from which this parochet came) has been transformed into an exhibition hall.  The particularly magnificent synagogue was built in 1898 by Lipot Baumhorn, the best-known synagogue architect and consecrated as a synagogue in 1899.  It was raised on a rectangular ground plan measuring 65.06 feet by 112.17 feet with a main interior hall measuring 58.9 feet by 58.9 feet.  Lipot Baumhorn drew many elements from his master, Odon Lechner (the dome bears a striking resemblance to the dome of the Museum of Applied Arts in Budapest), although the design also shows the influence of Italian and German architecture.  The building’s distinctive features include the triple arch of the entrance, the emphatic central axis, the large round windows and the symmetrically placed arched double windows.  The religious symbols and original furnishings were removed from the interior and thus only the beauty of the original architecture has survived.  Inside the building, the dome rests on lavishly carved columns.  The one-time women’s gallery has also been left in its place.

At the outbreak of World War II, the community numbered approximately 2500 people.  During the Holocaust the 1800 Jewish citizens of Szolnok were forced into the city ghetto.  In June 1944, the authorities set up the county ghetto on the premises of the sugar factory and they transferred all the Jews there from the neighboring settlements and the vacated city ghetto.  At last there were about 5800 people crowded into the small area.  At the end, on the 26th of June, the prisoners were divided into two groups.  The first group was put onto trains the very same day and got transported to Austria for industrial or agricultural forced labor.  The second group was deported to Auschwitz three days later.
All the religious symbols have vanished from the building and today the building is used for various cultural purposes.