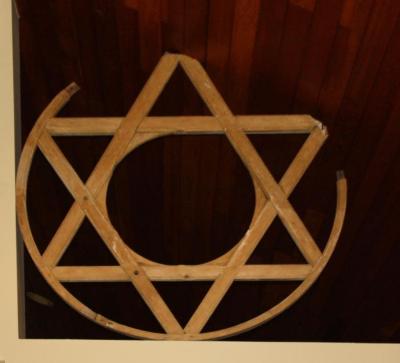 caption:
Circular window frame, surrounding Magen David (Star of David).  A portion of the circular frame has been broken.

This discarded frame was discovered by Steve Greenwald on West 104th Street and Clifton Blvd. In Cleveland, Ohio, who later donated it to Hillel.

Description
The phrase, Magen David (Shield of David), appears in the third benediction after the reading of the Haftarah in the liturgy, where it serves as a reference to God.  But the Magen David was not known as a specifically Jewish symbol either in Biblical or Talmudic times. Rather, it was used for decoration and as a magical symbol in many civilizations and parts of the world.  According to Gershom Scholem (Kabbalah, Magen David), Jewish groups took over the designation "Seal of Solomon" from Islamic magic sources.  As a lucky sign, it began to appear on Mezuzot of the tenth century.

Its first official use was in Prague as a heraldic device.  Later it spread from there to other European countries.  It became widespread only in the 19th century, when Central European Jews were looking for a sign to represent Judaism as the cross did Christianity.

In 1897, it was adopted by the First Zionist Congress, and was subsequently incorporated in the flag of the State of Israel.  It also is the symbol of the Israeli emergency relief organization, comparable to the Christian Red Cross and the Islamic Red Crescent.  The Nazis used the star as the identifying badge that Jews had to wear throughout Europe during the Nazi Era.  It has become a badge of pride for many contemporary Jews, and serves as a decorative element in many Jewish institutions and synagogues.