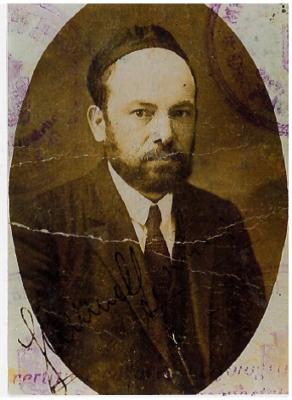 caption:
Picture of Samuel Fischer from his Passport

Pictures and documents provided by Ronald Wilheim of Cincinnati, Ohio from his maternal grandmother, Irene Verdes (who was the daughter of Samuel Fischer).

Description
Samuel Fischer was married in 1913 to Pesi.  Samuel and Pesi lived in the Transylvanian city of Satmar (Szatmar), then located in Romania (at various time, Satmar was considered part of Hungary and Romania).  They had eight children, including Irene and Alexander.  The Fischer’s owned two factories in Satmar.


In 1927 – 1928, the Fischers had the opportunity to leave Romania for the United States.  Rabbi Samuel Fischer had been offered the position as the religious leader of Congregation Shaare Zedek Anshei Ungarn in Brooklyn, NY.  [see attached letter]  Samuel’s wife, who was very committed to living a life in accordance with the Torah, refused to take the family to the United States as she feared the extreme difficulty in living a Torah observant life in the United States at such time.


In March of 1944, the Nazis occupied Satmar and created a ghetto for the Jews to  live in.  One of the factories owned by the Fischers was located within the ghetto and the family moved into their uncle’s house which was attached to the factory.


When it became apparent that the Nazis were going to deport the Jews in the Satmar ghetto, Samuel Fischer broke the concrete floor in the basement of his factory and buried his atara as well as their Shabbat candlesticks and Hanukah Menorah.  His daughter, Irene kept him company while he buried these family heirlooms.

On May 19th, the Fischers were deported from the Satmar Ghetto to Auschwitz.  They arrived four days later on May 23rd when they were promptly separated.  Both Samuel and Pesi Fischer were killed in Auschwitz along with four of their eight children.  Four children, Irene, Alexander, Dushi and Udu, survived Auschwitz, various work camps and the death march.


Upon returning to Satmar, they discovered that their factory and the attached house had been taken over to become the German military headquarters for the region during 1944.  The allies had bombed the buildings and killed many Germans.


Irene Fischer remembered that her father had buried his atara, candlesticks and menorah and had her brother Alexander dig them up from under the basement floor.  Amazingly, none of them had been discovered by the Germans nor had they been damaged during the Allies’ bombing of the buildings.


The family reopened the factory until the Communist government of Romania nationalized it and took ownership of the factory.  In 1956, there was a 3 day uprising against the Romanian communist government.  During those three days, the family fled to neighboring Hungary and then on to Austria.  Alexander and Dushi eventually settled in Israel and Irene and Udu moved to the United States.


The atara that had been buried during the war was taken to Israel by Alexander.  Alexander changed his last name upon arriving in Israel (as many Jews have done) from Fischer to Reshef.  Alexander had a son whom he named after his father, Samuel.  Samuel Reshef joined the Israeli military and rose in the ranks until he became captain.  Upon the death of Alexander, he gave his father’s atara to his son Samuel.  Upon the death in 2010 of Samuel Reshef,  [see attached obituary] the atara was passed on to Irene’s grandson, Ronald Wilheim, whose Hebrew name was Samuel, after his great-grandfather, Samuel Fischer.