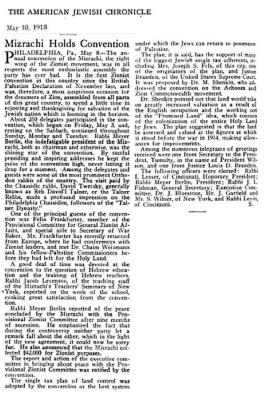 Philadelphia, PA., May 8 - The annual convention of the Mizrachi, the right wing of the Zionist movement, was in all respects the most enthusiastic assembly the party has ever had. It is the first Zionist convention in this country since the British Palestine Declaration of November last, and was, therefore, a most auspicious occasion for the dreamers of Zion, assembled from all parts of this great country, to spend a little time in rejoicing and thanksgiving for salvation of the Jewish nation which is looming in the horizon.

About 350 delegates participated in the convention, which began on Friday, May 3, and, resting on Sabbath, continued throughout Sunday, Monday and Tuesday. Rabbi Meyer Berlin, the indefatigable president of the Mizrachi, both as chairman and otherwise, was the shining star of the convention. By tactful presiding and inspiring addresses he kept the pulse of the convention high, never letting it drop for a moment. Among the delegates and guests were some of the most prominent Orthodox rabbis of the country. The visit paid by the Chassidic rabbi, David Twersky, generally known as Reb. Dovid’l Talner, or the Talner Rebbe, made a profound impression on the Philadelphia Chassidim, followers of the “Talner Dynasty.”

One of the principal guests of the convention was Felix Frankfurter, member of the Provisional Committee for General Zionist Affairs, and special aide to Secretary of War Baker. Mr. Frankfurter, has recently returned from Europe, where he had conferences with Zionists leaders, and met Dr. Chaim Weizmann and his fellow-Palestine Commissioners before they had left for the Holy Land.

A good deal of time was devoted at the convention to the question of Hebrew education and the training of Hebrew teachers. Rabbi Jacob Leveson, of the teaching staff of the Mizrachi’s Teachers’ Seminary of New York, reported on the work of the school evoking great satisfaction from the convention.

Rabbi Meyer Berlin reported of the peace concluded by the Mizrachi with the Provisional Zionist Committee after nine months of secession. He emphasized the fact that during the controversy neither party let a remark fall about the other, which in the light of the new agreement, it could now be sorry for. He also announced that the Mizrachi collected $42,000 for Zionist purposes.

The report and action of the executive committee in bringing out peace with the Provisional Zionist Committee was ratified by the convention.

The single tax plan of land control was adopted by the convention as the best system under which the Jews can return to possession of Palestine.

The plan it is said, has the support of many of the biggest Jewish single tax adherents, including Mrs. Joseph S. Fels, of this city, one of the originators of the plan, and Justice Brandeis, of the United States Supreme Court. It was proposed by Dr. M. Shenkin, who addressed the convention on the Achoora and Zion Commonwealth movement.

Dr. Shenkin pointed out that land would take on greatly increased valuation as a result or the English occupation and the working out of the “Promised Land” idea, which consists of the colonization of the entire Holy Land by Jews. The plan suggested is that the land be assessed and valued at the figures at which it stood before the war in 1914, making allowances for improvements.

Among the numerous telegrams of greetings received were one from Secretary to President Tumulty, in the name of President Wilson, and one from Justin Louis D. Brandeis.