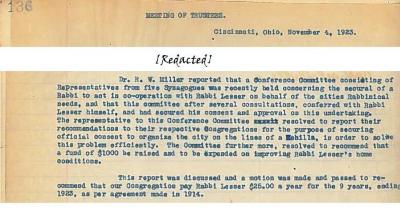 caption:
The Conference Committee discussed in the below abstract from the Board of Trustees of Kneseth Israel Minutes eventually led to the formation of the VAAD Hoier of Cincinnati.

The text reads:
MEETING OF TRUSTEES.

Dr. R. W. Miller reported that a Conference Committee consisting of representatives from five Synagogues was recently held concerning the secural of a Rabbi to act in co-operation with Rabbi Lesser on behalf of the cities Rabbinical needs, and that this committee after several consultations, conferred with Rabbi Lesser himself, and had secured his consent and approval on this undertaking. The representative to this Conference Committee resolved to report their recommendations to their respective congregations for the purpose of securing official consent to organize the city on the lines of Kehilla, in order to solve this problem efficiently. The committee further more, resolved to recommend that a fund of $1,000 be raised and to be expended on improving Rabbi Lesser’s home conditions.

This report was discussed and a motion was made and passed to recommend that our Congregation pay Rabbi Lesser $25.00 a year for the 9 years, ending in 1923, as per agreement made in 1914.