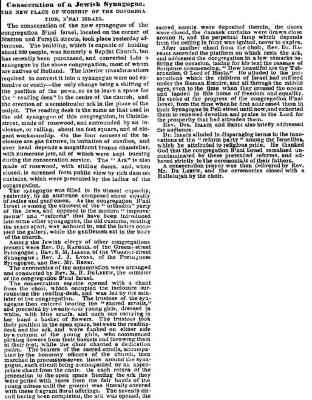 caption:
Consecration of a Jewish Synagogue.
The New Place of Worship of the Congregation, B’nai Israel.

The consecration of the new synagogue of the congregation B’nai Israel, located on the corner of Stanton and Forsyth streets, took place yesterday afternoon. The building, which is capable of holding about 800 people, was formerly a Bapist Church, but has recently been purchased, and converted into a synagogue by the above congregation, most of whom are natives of Holland. The interior transformations required to convert it into a synagogue were not extensive or costly – the only change being a shifting of the position of the pews, so as to leave a space for the “reading desk” in the center of the church, and the erection of a semicircular ark in the place of the pulpit. The reading desk is the same as that used in the old synagogue of this congregation, in Christlest-street, made of rosewood, and surrounded by an enclosure,  or railing, about ten feet square, and of elegant workmanship. On the four corners of the enclosure are gas fixtures, in imitation of candles, and over head depends a magnificent bronze chandelier, with numerous jets, all of which were kept burning during the consecration service. The “Ark” is also made of rosewood, with sliding doors, and, when closed, is screened from public view by rich damask curtains, which were presented by the ladies of the congregation.

The synagogue was filled to its utmost capacity, yesterday, by an audience composed about equally of ladies and gentlemen. As the congregation B’nai Israel is among the strictest of the “orthodox” party of Jews, and opposed to modern “improvements” and “reforms” that have been introduced into some other synagogues, the old customs, seating the sexes apart, was adhered to, and the Ladies occupied the gallery, while the gentlemen sat in the body of the church.

The ceremonies of the consecration were arranged and conducted by Rev. M. R. De Leruw, the minister of the congregation B’Nai Israel.

The consecration service opened with a chant from the choir, which occupied the enclosure surrounding the reading-desk, and was led by the minister of the congregation. The trustees of the synagogue then entered bearing the “sacred scrolls,” and proceeded by twenty-four young girls, dressed in white, with blue scarves, and each one carrying in her band a basket of flowers. The trustees took their position in the open space, between the reading desk and the ark, and were flanked on either side by a column of the young girls, who commenced picking flowers from their baskets and throwing them at their feet, while the choir chanted a dedication psalm. The bearers of the sacred scrolls accompanied by the honorary officers of the church, then marched in procession seven times around the synagogue, each circuit being accompanied by an appropriate chant from the choir. On each return of the procession to the open space fronting the ark they were pelted with roses from the fair hands of the young misses until the ground was literally covered with these fragrant floral offerings. The seventh circuit having been completed, the ark was opened, the sacred scrolls were deposited therein, the doors were closed, the damask curtains were drank close around t and the perpetual lamp which depends from the ceiling in front was ignited, never to expire.

After another chant from the choir, Rev. Dr. Raphall ascended the platform on which rests the ark, and addressed the congregation in a few remarks befitting the occasion taking for his text the passage of Scripture commencing, “How beautiful are they Tabernacles, O Lord of Hosts.” He alluded to the persecutions which the children of Israel had suffered under the Roman Empire and all through the middle ages, even to the time when they crossed the ocean and landed in this home of freedom and equality. He spoke of the progress of the congregation B’nai Israel, from the time when he first addressed them in their Synagogue in Pell-street until now, and exhorted them to renewed devotion and praise to the Lord for the prosperity that had attended them.

Dr. Isaacs alluded in disparaging terms to the innovations of the “reform party” among the Israelites, which he attributed to religious pride. He thanked God that the congregation B’nai Israel remained uncontaminated by these pretended reforms, and adhered strictly to the ceremonials of their fathers.

A consecration prayer was then delivered by Rev. Mr. De Leruw, and the ceremonies closed with a Hallelujah by the choir.