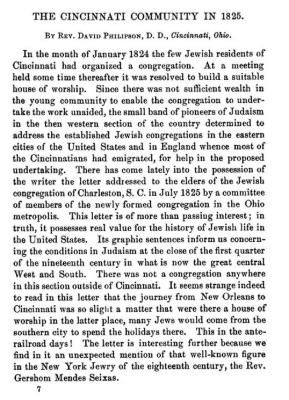 caption:
THE CINCINNATI COMMUNITY IN 1825.

In the month of January 1824 the few Jewish residents of Cincinnati had organized a congregation. At a meeting held some time thereafter it was resolved to build a suitable house of worship. Since there was not sufficient wealth in the young community to enable the congregation to undertake the work unaided, the small band of pioneers of Judaism in the then western section of the country determined to address the established Jewish congregations in the eastern cities of the United States and in England whence most of the Cincinnatians had emigrated, for help in the proposed undertaking. There has come lately into the possession of the writer the letter addressed to the elders of the Jewish congregation of Charleston, S.C. in July 1825 by a committee of members of the newly formed congregation in the Ohio metropolis. This letter is of more than passing interest ; in truth, it possess real value for the history of Jewish life in the United States. Its graphic sentences inform us concerning the conditions in Judaism at the close of the first quarter of the nineteenth century in what is now the great central West and South. There was not a congregation anywhere in this section outside of Cincinnati. It seems strange indeed to read this letter that the journey from New Orleans to Cincinnati was so slight a matter that were there a house of worship in the latter place, many Jews would come from the southern city to spend the holidays there. This in the anterailroad days! The letter is interesting further because we find in it an unexpected mention of that well-known figure in the New York Jewry of the eighteenth century, the Rev. Gershom Mendes Seixas.

Description
Printed in the ​Publications of the American Jewish Historical Society
No. 10 (1902), pp. 97-99