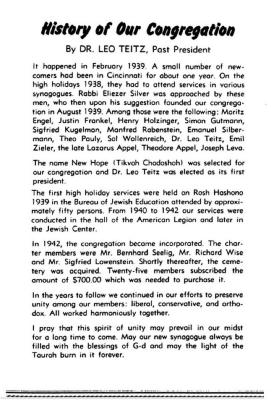 caption:
History of Our Congregation

By Dr. Leo Teitz, Past President

It happened in February 1939. A small number of newcomers had been in Cincinnati for about one year. On the high holidays 1938, they had to attend services in various synagogues. Rabbi Eliezer Silver was approached by these men, who then upon his suggestion founded our congregation in August 1939. Among those were the following: Mortiz Engel, Justin Frankel, Henry Holzinger, Simon Gutmann, Sigfried Kugelman, Manfred Rabenstein, Emanuel Silbermann, Theo Pauly, Sol Wallenreich, Dr. Leo Teitz, Emil Zieler, the late Lazrus Appel, Theodore Appel, Joseph Leva.

The name New Hope (Tikvoh Chodoshah) was selected for our congregation and Dr. Leo Teitz was elected as its first president.

The first high holiday services were held on Rosh Hashanah 1939 in the Bureau of Jewish Education, attended by approximately fifty persons. From 1940 to 1942 our services were conducted in the hall of the American Legion and later in the Jewish Center.

In 1942, the congregation became incorporated. The charter members were Mr. Bernhard Seeling, Mr. Richard Wise and Mr. Sigfriend Lawenstein. Shortly thereafter, the cemetery was acquired. Twenty-five members subscribed the amount of $700,000 which was needed to purchase it.

In the years to follow we continued in our efforts to preserve unity among our members: liberal, conservative, and orthodox. All worked harmoniously together.

I pray that this spirit of unity may prevail in our midst for a long time to come. May our new synagogue always be filled with the blessing of G-d and may the light of the Torah burn in it forever.